When my father told me that a mid-morning fusion of breakfast and lunch was called brunch, I thought he’d made the word up. I was fascinated with the concept of combining two words into a new one with a unique meaning that captures both. Brunch may not have been my first portmanteau, but it was my earliest awareness of it as linguistic legerdemain.

I loved the Alice books, the rhythms of “Jabberwocky.” I knew that Lewis Carroll had invented most of the nonsense words, but it hadn’t occurred to me that some were created from pairs of ordinary words: “galumph” for gallop and triumph, “chortle” from chuckle and snort, “slithy” from slimy and lithe.

A portmanteau, from the French porter, to carry, and manteau, mantle, was originally a person—an officer who carried the cloak of a high-ranking official. Later it was applied to a suitcase with two parts that could be used separately, then to travel cases, coat and hat racks. Lewis Carroll coined its linguistic definition: “two meanings packed up into one word.”

I added motel to my growing vocabulary of fused words when, on family vacations to visit relatives in San Francisco, we would break the 500-mile drive with an overnight stop in central California, at one of these roadside inns—motor hotels—along Highway 101 around San Luis Obispo or Paso Robles. Earlier on those road trips, we had to roll up the car windows when we came within range of the ochre-tinted, acrid-smelling air of Los Angeles. I thought smog was L.A.’s unique signature, even when unruly winds occasionally drove the noxious blend of smoke and fog south, sullying our clear skies in San Diego. But long before auto pollution ran rampant in L.A., late 19th-century London was plagued with dense, smelly, soupy fog caused by industrial and domestic coal burning. The term smog was adopted around the turn of the 20th century. Though not named, grimy, yellow-brown fog is a frequent backdrop in Charles Dickens’ London. In “Prufrock,” T.S. Eliot calls it “the yellow fog that rubs its back upon the windowpanes.”

While I haven’t witnessed smog on visits to London, I’m familiar with another British weather hybrid—that hovering almost-rain, more than a mist but less than a drizzle, called mizzle. And while the word isn’t used on this side of the pond, or at least not in my drought-ridden Southern California, there’s a mizzle happening outside my window as I write this.

I think of portmanteau as verbal collage, making something new out of pre-existing materials, collage from the Greek kolla and the Old French coller, “to glue.” Marketing and PR pundits scrunch (squash/crunch) words and names together to fashion catchy brands. New portmanteaux are conceived every day—some catch on, while others die quick and merciful deaths. For better or worse, we have caplets (capsule/tablets), cronuts (croissant/donuts), and cremains (cremation remains). We have hybrids for designer dogs, like cockapoos and labradoodles. Microsoft merges microcomputer and software; Britain’s recent exit from the E.U. was called Brexit.

My husband and I create collages—his visual, mine literary—and we engage in verbal repartee, concoct our own nonsense words. I read him a list of portmanteaux, some of them new to one or both of us. I hadn’t realized that “snark” is a mash-up of snide remark; my husband suggests alternate roots: snipe and bark. J.K. Rowling devised “muggle” in Harry Potter’s world as someone who does not have magical powers. But what I call muggle are those times, which writers know well, when I muddle and struggle. 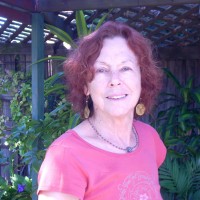 Alice Lowe’s short prose has been or will be published this year in Burningword, Drunk Monkeys, ellipsis, Festival Review, Change Seven, (mac)ro(mic), and Sport Literate. She’s been twice cited in Best American Essays “Notables” and nominated for the Pushcart Prize and Best of the Net. Alice writes about life, literature, food and family in San Diego, California