In those days, a milkman serving Comanche Drive in Kettering

The racket of glass-empties trailed him from house to house.

A man as foreseeable as the rising and setting of the sun.

The milk boxes read Meadowgold and the wisecrack

was, There goes your father, youngster. Never mind

transporting men to Vietnam in nineteen sixty-five or

a little something for the mob tyranny of the everyday,

here was someone I could count on after JFK’s murder,

after a father’s desertion and his whispered remarriage.

Not someone to count on so much as imagine otherwise.

So what if the Beatles would have thought him Square—

I thought he might make a good husband for my mom.

I huddled at the big picture window; watched, waving

to what a child sees is about to arrive on the doorstep.

The truth about the disappearance of some milkmen,

that milkman, is he never really appeared. Never once

stepped from the idling van as anything but the slog

beside the beaded bottles, unable to make change. 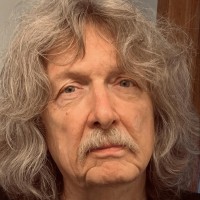 Roy Bentley is the author of Walking with Eve in the Loved City, chosen by Billy Collins as a finalist for the Miller Williams prize; Starlight Taxi, winner of the Blue Lynx Poetry Prize; The Trouble with a Short Horse in Montana, chosen by John Gallaher as winner of the White Pine Poetry Prize; as well as My Mother’s Red Ford: New & Selected Poems 1986 – 2020 published by Lost Horse Press.