That nidus, that beak-woven bowl,

braided snugly under and over

gripping each other tightly…and brown.

Yes, I was Peeping Mike (I think subtly),

too nasty, too wet then too scruffy

in the twig box, then gape-mawed

yawping for a parent’s crop milk.

I only filled the feeder seed tube.

How could you…just leave…with the kids?

When the little ones had real feathers,

I walked to the train and rode to Haymarket

for produce, my own version of seed.

I hiked back up the hill three hours later.

(But you have neither wristwatch nor wrist.)

Our nest is empty. All five of you gone…

I had imagined a Disney cartoon

of fledglings perching on rhody branches,

then plunging out, not down.

From biped to biped, I wanted to see

that minute they did what I never can

— take wing for once and forever more.

Only your masterpiece of weaving remains.

We have signed no contract.

And I cannot speak dove. 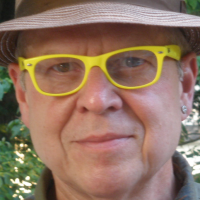 Michael Ball, 71, lives in Hyde Park, Boston. He was a newspaper reporter, then business and technical writer and editor. Contact Michael at ganesha@michaelball.com. Follow Michael on Twitter @whirred and on Facebook @ facebook.com/harrumph. You can also read Michael’s blog here: harrumpher.com