The figures appeared at around age six, etched into every surface my sister could find: foil attic insulation, stones peppering the walkway, Dad’s backyard rotisserie, and Sunday pancakes. At first, they were no more than wind-blown scratches on the earth’s surface, dust settling into the grooves. Later, the scrawling lines leaned and bent into letters spelling out our names as they appeared on countless flower bouquets and greeting cards.

In time, the subjects turned darker: birds and fish that were half-human or with great, crested heads, as if portending some frightening, disembodied future. Her art teacher called home when she saw them, concerned there’d been trauma in the family.

“Don’t worry, that’s just Annie,” mom reassured her. “She has a vivid imagination.”

In retrospect, I feel like I should have known that she was shouting to be heard, struggling to send a message that had been delivered too far into the future.

Years passed and the old farmhouse settled into its second century. We bottled tornadoes and sat on curbs eating ice cream and waving off boys who offered us rides out of the rain when there was no rain. In the slouch of late summer, we wandered the house in our nightgown, pretending we were ghosts.

“Mom,” we said, creeping up on her as she worked in the garden, floating across the yard and burying our hands in the dirt to plow up big clods of it with our fingernails. “We’re dead.”

She crouched in her black bikini, flush with the Buddha planters scattered throughout the yard, telling us to go take a shower. When we said we already had, her suggestion was to go float in the lake.

We lost our bodies in the water, waves rippling over our bellies and crashing into each other—the past overlapping with the present, the two changing places. We played in the woods with the neighborhood kids, staying on the wooden bench at the edge of the pond to watch the sun sink into the tangled vines. The woods were dark and deep and breathed like the ancient trees. Bedrock of karst limestone ran through the moraine, forming sinkholes and caves with crystal stalactites that gleamed like teeth.

My sister never talked much. I lost my gaze on the creek that trickled through the grass and flowed into a little waterfall and tried to memorize how my body felt in the loose-fitting flannel shirt and blue jeans as if I needed the memory to know it was real.

“Do you know about the little guy?” she once asked me.

“He visits you when you sleep. Comes and sits on your shoulder or perches on the ledge, or creeps across the floor so the boards creak.”

She shrugged. “Not that much. I try to ignore him, but he still sometimes wakes me up at night.”

Outside the woods, we found a pile of rocks and fossils. My sister knelt to hold up one of the specimens embedded in gray slate and lay her hand in its crystallized depressions, the fingers matching up perfectly. Birds flew in aerials overhead, cutting the sky in fractals of blue, and scattered from the trees’ black tips like embers. Annie’s dark hair hung down by her waist. She pulled her hand away and fluttered her fingers and looked up at me, then toward the sky. I wanted to see what she saw, but I could only hear their cries grow more distant as the sky enveloped them in its soft folds.

When I hit seventeen, I started venturing to the woods with boys. We lay in the grass and listened to the crickets chirp, pretending to ignore the eyes of the deer blinking on the edge of the wood.

We stayed past sundown, moonlight oozing through the crowns of the trees in the clearing. I saw their eyes whirl like coins and glow like mood rings. We sank into the grass and maidenhair ferns, wild phlox, and geranium. The next day, the pockets of my jeans would be stained with dandelion juice.

Their hands trailed down my belly and undid the button on my pants, sliding them off my hips. A frisson ran through me as the hands wrapped around my waist and pressed into my spine.

In the dark, I thought I heard footsteps enter the woods. I leaned my head around to try to find the source, but my vision met nothing but blackness. The sounds made a dull rhythm in my head, like some vaguely remembered dream.

I thought of my sister and her drawings and being visited in her sleep, but her voice echoed in fragments off the stone recesses. I imagined her painting the walls, outlining our bodies in chalk as if documenting the scene of a crime.

“My sister is going to be a famous artist,” I said between shortening breaths.

“Yes,” I said. “You should see her work. It’s really something.”

We kissed in a way that made me forget anything other than the shape of his lips.

In the morning, we went back out and searched for the drawings, thinking they’d be easy to find in the daylight shed in the alcove below the rocky overhangs.

But there was nothing but time-smoothed stone, and when I went to ask my sister, she was coming off another long night and desired rest. I held her in the fold of my elbow and forearm as she drifted off—tiny agit of breath fluttering against my skin—remembering how it had been the two of us when we were little, inseparable. I’d come to realize what it meant to give up a lot of things in order to move forward, and how eventually, it meant letting go of that, too. 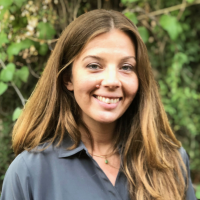 Katie Nickas, 35, lives in San Antonio, Texas. She works as a grant writer at Alamo Colleges.