‘It is relentless and holds no one in esteem. It roams the unbeaten jungle of the business world and leaves the empty shells behind, blows this way and that, trampled in to dust by empty obsessions. Its province of study is everywhere and leaves no-one untouched!’ A small man stops talking to the river and blows his nose, he has a bad cold, which has cleared his head into a fearful conclusion. His life is a total waste of time.

‘I shall retreat into strict retreat,’ he mumbles, ‘I shall bury my sorry head in a bucket of torment.’

‘It can’t be that bad.’ A small, confident voice behind him.

Startled, and full of foolish questions, the small man twirls around. There is no one there. Only a bench. ‘What?’

The voice took no notice but continued. ‘There is no point to either propound for or elaborate on, the Swedenborg System. Mere nonsense. If you do, you will find the metaphysical ideas of age to be a perpetual irritant instead of the soothing balms of age as they should be taken.’

The small man sat. Occasional seizures of wrath shook his body, but he remained in place.

The Moon rose and smiled down. It seemed to him a fulsome Moon full of wisdom and to which he listened solemnly, bent slightly forward, hands clasped between his knees.

‘Renounce your gift,’ said the Moon, ‘and become free with me, for I am the Thief of Souls.’ 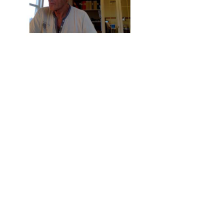 Nigel Ford is 75, works as a translator, writer, visual artist and dramatist. He is English and lives in UK and Sweden.